=sorry about the mess

When viewing the homepage on a phone, tilt it sideways to not see one by one piece, but several columns at the same time. Reading it on a computer or tablet is ofcourse a better option.

hello! Thanks for stopping by. I am here to present some context, some thoughts on my world, to the river of streaming symbology that is my artistic catalog. I’m in my forties now, but ever since I could use a pencil I never really stopped. I’ve always been drawn to the bizarre and dark, and I’m told it shows. I studied Fine Art in Falmouth College of Arts BA between 03 and 05.

there are several repeating imageries, but over the years I have noticed some tendencies I would like to point at. Perhaps the idea of reading an small novel is a little more than you bargained for - if so, these three points would give enough of an introduction. 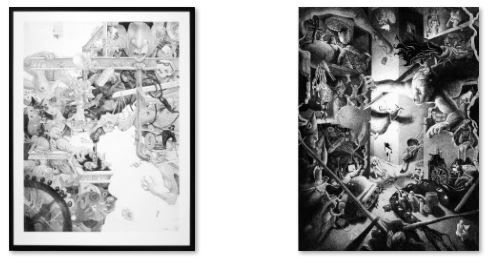 if you’d study the path of progression, you would find the point when my work accelerated its pace and scope. It was with my two large drawings from Falmouth 2004 (midterm show, shown above here) that I had a need to emboss the use of symbology. I had to answer a burgeoning need to impress some discernible meaning into my work. Owing it to myself as well as visitors I wanted to add a system, a set of tools when interpreting (not only my own) artistic expression.

as a kid my mom always told me a wore my feelings on the outside of my skin. Little did anyone know how true that would turn out. It’s been 19 years now that I’ve worked on my Magnum Opus, the world with giants with a city growing on them, and it still feels like I got a lot more to uncover!

an early rendotion shown under here - note the devil and angel 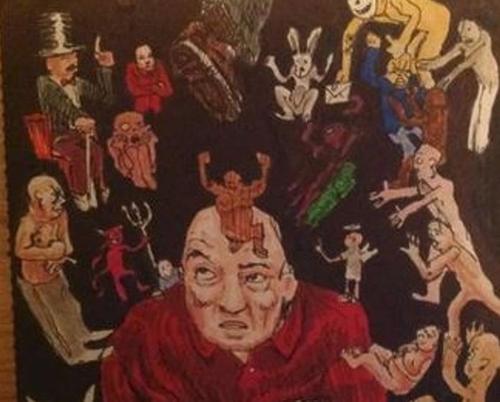 ~ the emergence of a world ~

in my graduation show (Falmouth 2005) I made a series of large charcoal and chalk drawings, «the Manscape series». Inspired by Luke Rineharts “The Diceman” during a period of increasing selfdoubt, self incrimination and depression. The idea is ofcourse, like so many artists before me, to make the self into a society of peoples, every bit representing various sides of their personality. Only I put the citizens directly onto the person they populate.

6 years later, still feeling drawn into this world of giants and cities I found the next natural step was for me to design my own city, into a back piece tattoo. Later I realised I when this image first came about: as a character in “Interior Design” 2004 ~ He’s in the lower left corner:

the dream is a full body suit tattoo… 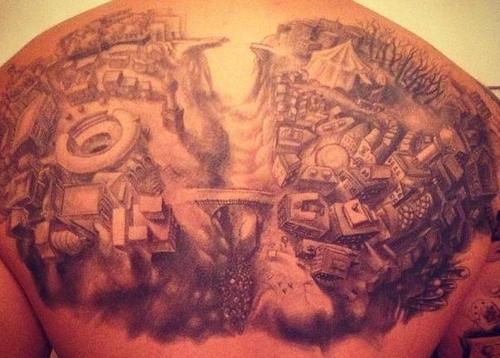 the next clue as you follow my artistic progression is when I found some sketches (2010 - around the time of the tattooing by the awesome Bjørn Holter, Symbolic Ink). The sketches were from 2003, five sketches Penpeople with pencils and rubbers for feet. So it struck me, Hey, I’ve got a city with no current residents… and I’ve got a clan of people with feet as pencils, but nowhere to go! This is a setup, I thought... Even though the movie Inside Out (2015) pretty much use the same framework and theme as me (2005) I find I will build on their color choices, so yellow is happiness, red is anger ofc, blue is sadness, green disgust, purple is fear. I have a few additions to the spectrum ofcourse.

when you have pencils for feet (created in 2003, the first yeart of uni), there really is something missing if not the ground would be made of paper. It seems my subconciousness thought of this as well: around 2016 i arranged weightless cloth swirling around heads or characters. These tornadoes spinning round the focus of attention was at the time thought of as "circumstances", and although they still sort of are, they are also the media where our storytellers make their marks. 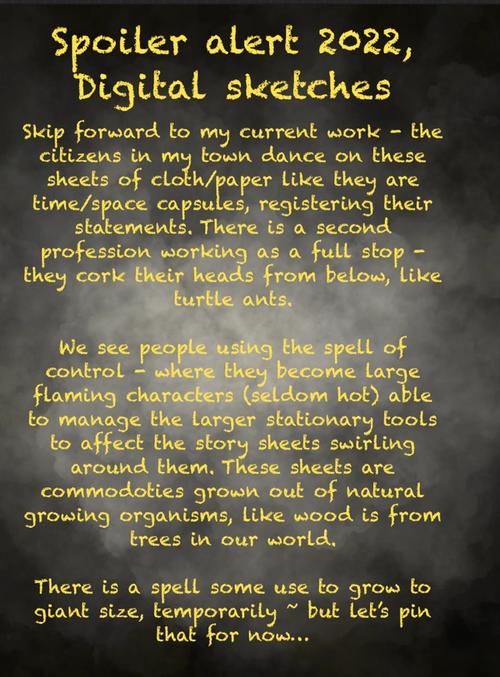 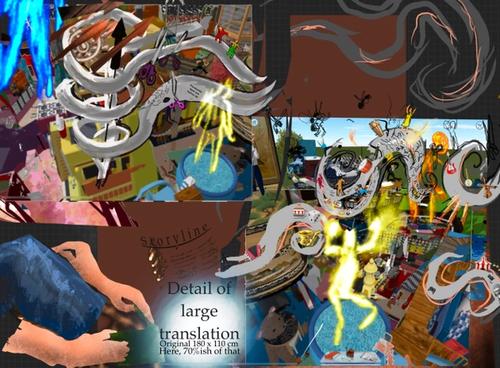 so - back to the progression:

as an artist I kept on interpreting what I saw, transferring everything into my perceptions; I was digging into what’s eating at me, at us. My 2012 series «I dreamt I ate the world» could be one offshoot building a layer to my unplanned world building. Another is when I was asked to join for the 2016 drawing biennale, I put my good old twisting lens to work: translating the real life symbiosis between employer and employee.

I found this very interesting and fun, so i looked at other with real life locations in Oslo loaded with cultural meaning, that I could tamper with…

that have later lead me to think: whoever was behind Circus Tornardo coming to Oslo with weird mojos…. they could well be residents from the pencilpeople-city on my back. It could even be them that left a mark in our real life, seeing as "someone" decorated a real life bar in the city centre (a video of this location, made by Studio Eplekjekk, music by Skyggesanger)

(the address is Akersgata 47, right next to VG-bygget). Hey, they even left a circus tent right as you enter the place! There’s a pattern forming!

(over: the circus tent as a pattern)

another thing i`ve realised - all of these worlds are visual interpretations of an internal world. With the Circus Tornardo-series we see this world (…my world) coming to real life, with its weightlessness, weird twists, sheets of paper with parody and/or comedy, sprinkled with snarky comments. Almost completely opposite to this setup: in Interior Design (04) we see an unpleasant birthing scene which I guess is sort of a doorway into my world from real life. Like a Rick and Morty-portal into the multiverse. The bag of intestines could symbolise the generations of self-indulgent, self righteous, narcissistic, spoilt blindness being born in our age.

~ back to the one off sketches ~

but I digress again. In retrospect i`ve named a series,

this is a series that was never meant to be one. Its a series because over time i see their returning direction that i wanted to take, in a sense they are made of the same calling, category or concepts, puns, dadjokes, nerdy references, setups and ideas. Politics and philosophy can seamlessly weave with introspection and catharsis - and there is always the pestering oblivion. They draw on the same traits as emojis or even tarot cards.

sure, it will be hit and miss, but that’s the way this has to be.

there is also the matter of my self portrait in three stages from 2013/15/17 with wolves and floating hands (allthough the detatched hands first appeared in 2002). I think I will keep on revising this painting even further..

...then, some 7 years later they reappear in this next series of mine, the jump into storytelling page by page. i only just realised ther comeback as a part of the unplanned worldbuilding.

so a couple of years ago, I glimmered a possibly to have something published.. it didnt fruition, but it inspired me to start on the work in progress «the Prequel» 2020- (not finished). At the moment it’s around 18 digital sketches

the story spins around some random guy is being kidnapped by a bunch of giant hands across the universe. They appear to be friendly and tells our protagonist many things, not everything is comprehensible. The travel sequence is bleeped out and eventually the hands bring our hero to a planet made of flesh, and rush into said planet where something needs repair or adjusting. Turns out there are several ?`s and !’s knotted into a ball of issues. Things are bound up tight around several chokeholds. Suddenly our protagonist wakes up and IT WAS ALL A DREAM!!

the series share some similarities with the Manscapes concept, in the sense that both symbolise one internal world of a person, and they echo each other enough that The Prequel could be incorporated as a dream by one of my inhabitants. It was around this time i realized several of my projects really had been cogwheels in the same storytelling machine. The dream wasnt one from the world you know. Welcome to Multiverse 10a32b11a

it came to a climax quite recently ~ when I found an architecture program (Keyplan 3D) that allowed me to stretch any of the several 100’s furniture or accessories into any size. Now, I use that engine to zoom in and out of my city ~ import to Procreate where I can add anything I want, skew it with a fish eye lens, strip away colour or change the sky. I will also add all my older sketches into scenes here and there and then enlarge the digital drawings to add to my series of large scale translations.

I’ve found a little assistance when explaining my world, based on symbology and iconography; the the emoticon keyboard. It’s already introduced and embraced by everyone. From the same keyboard I can add trinkets from videogames, apps, nerdy references, symbols or twists to your «irl». 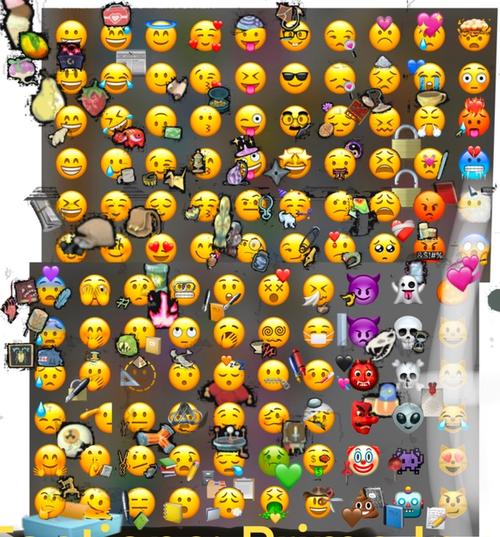 when the band Ondheim asked me to design the cover for their second album, it was all too easy to fit their lore into my existing one - into political theatres representing good and evil. 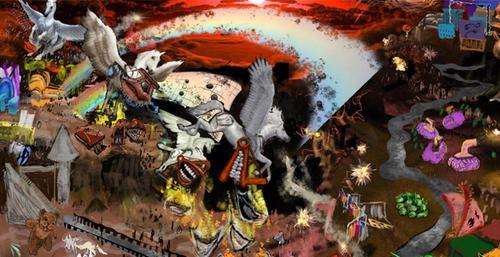 eventually the hands from the “self portrait with wolves”-series started to show up in these digital sketches in the Prequel connecting more circles as more of my ideas come together. Evolutuion would have all of my artistry tied into one epic story, that I can dig into forever.

If i were to summarize the project into one paragraph, it would be this: I study homographs (words with multiple meanings), but also images with multiple meanings. I connect these ideas with sayings and see what truth or fun can be drawn from adding the _other_ meaning to a phrase. I want to twist meanings and understandings through various lenses that could apply. Sometimes dark humor or quirky ideas, sometimes bizarre fantasies, sometimes unreal nightmares. Ultimately all these ideas contrast between micro (all the feelings and everyting within a person) and macro (our society as a whole), and see what can be gleaned from comparing these concepts.

in my upcoming series of large scale translations, I picture several streets with masses of people watching and participating, each with their own deck of variable tarot cards. When played, these cards turn into projectors or beacons with living and continually changing holograms battle and twist each other (link to Jeff Koons Easyfun Ethereals, inspiration not far off the mark), all the while bursting smaller fractals of symbolism if you`d zoom in. These gatherings would be part street art/show, part political campaign/debate, part social interaction/battle.

my working title scrap wall is a little messy, but it will be a long bake. 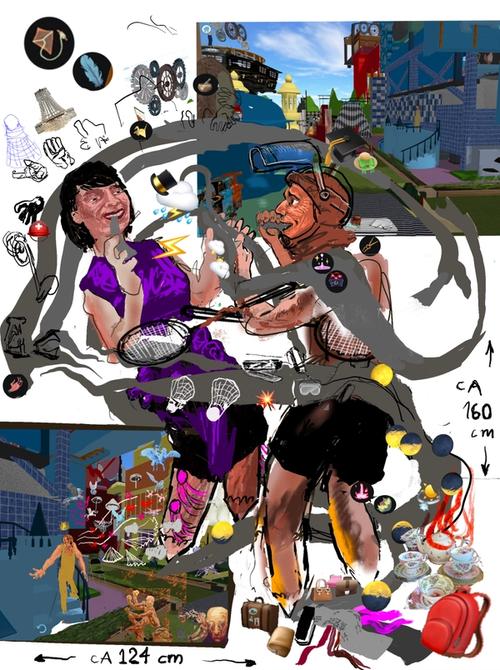 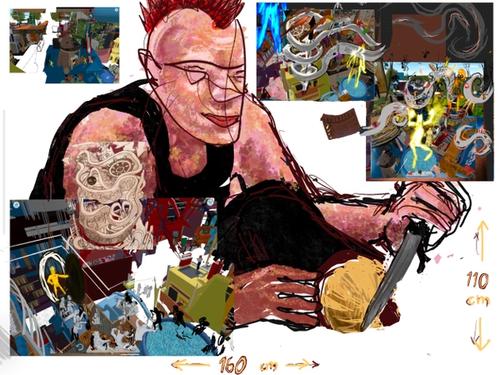 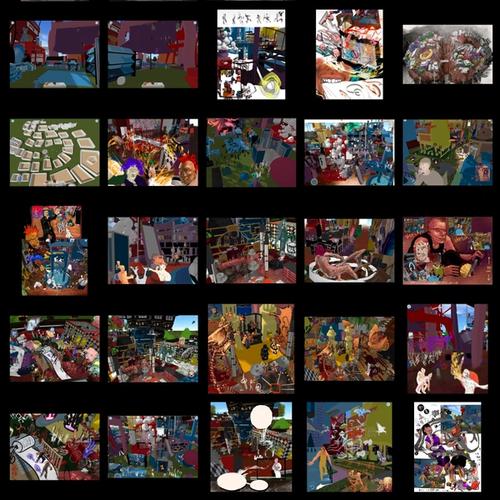 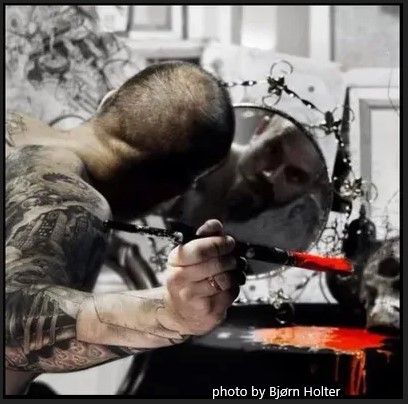